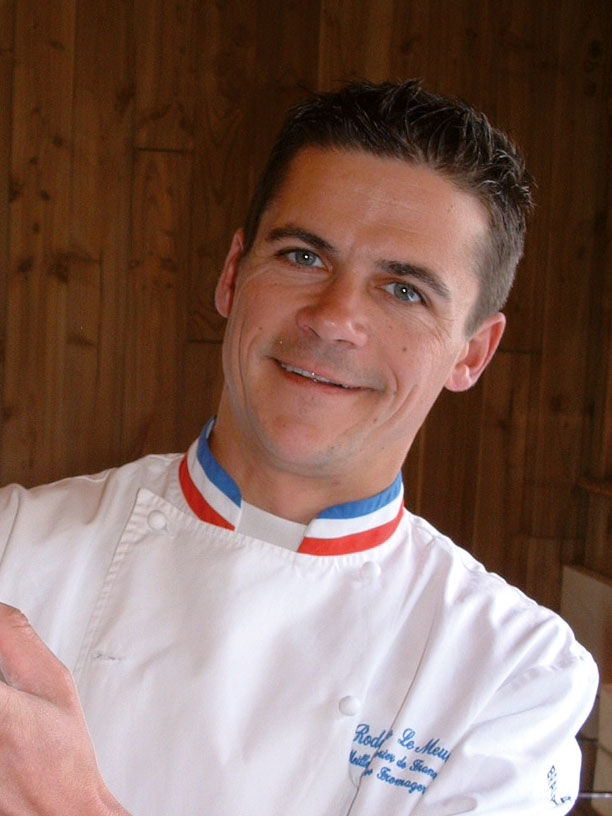 Rodolphe LE MEUNIER, matures and refines his character cheeses in the heart of the Loire Valley. Born into a family of 3 generations of cheese-makers, he has carried on the traditions and excellence that he learned from his parents and grandparents. His expertise is known and recognised.

Since 2007, Rodolphe Le Meunier has decorated his jacket with the Red, White and Blue collar reserved for the "Meilleurs Ouvriers de France". That same year, he won the title of Best International Cheese-maker at the International Caseus Awards.

Rodolphe Le Meunier regularly travels the world – the United States, Japan, South America – to pass on his love of his work. He is also one of the co-organisers of the "Mondial du Fromage et des Produits Laitiers" (World Cheese and Dairy Products Fair). Rodolphe also owns the brasserie "Chez Rodolphe" in Tours.

This cheese is really interesting. What I like is a really young Brillat-Savarin that’s still full of freshness, or a fully-matured one, when it’s developed its lovely, velvety rind and the centre has become slightly runny. The sensations are very different.

I particularly want to emphasise just how good this cheese is in the kitchen. I’m both a cheese-maker and a restaurateur, and I think Brillat-Savarin is the only one of its kind. For sauces, for example, I like using it with spices or different varieties of pepper, as in my “filet mignon with truffles” recipe. But you can also make some quite surprising mousses. Infuse some cream and rosemary then cut a piece of Brillat-Savarin into small chunks, put it all through the blender and then work the mousse on your plates with a siphon. This produces some really complex aromas.

In Japan, I created a sushi recipe in which Brillat-Savarin replaces the sticky rice. It’s called “Sushi Cheese” and people love it. My favourite dish with Brillat-Savarin is “Petit Théodore”. This is a young Brillat-Savarin which is edged all the way round with raisins marinated in rum and brown sugar. It’s hugely popular. Why Petit Théodore? Because it’s very soft-hearted but pretty robust at the same time, like my son, Théodore.